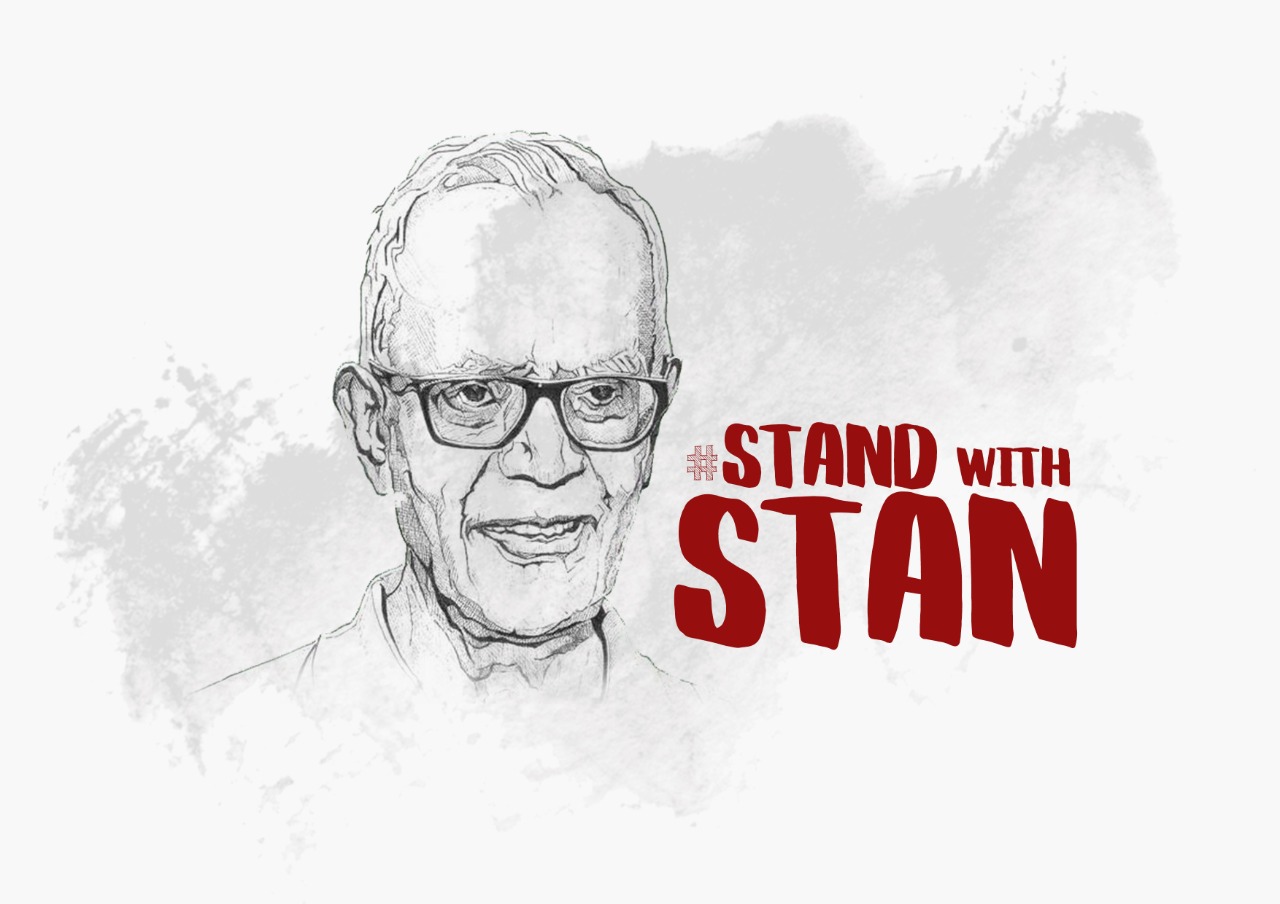 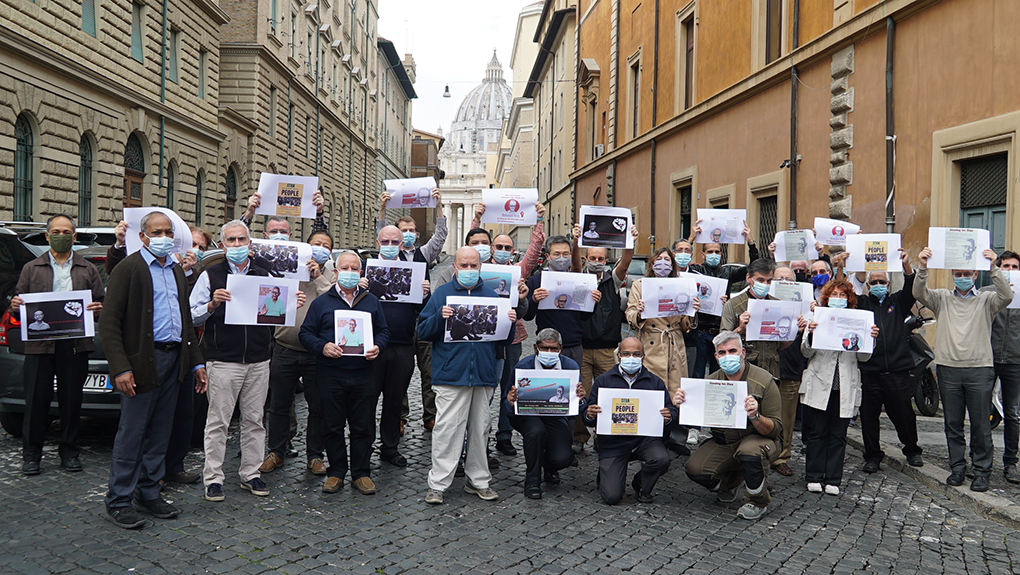 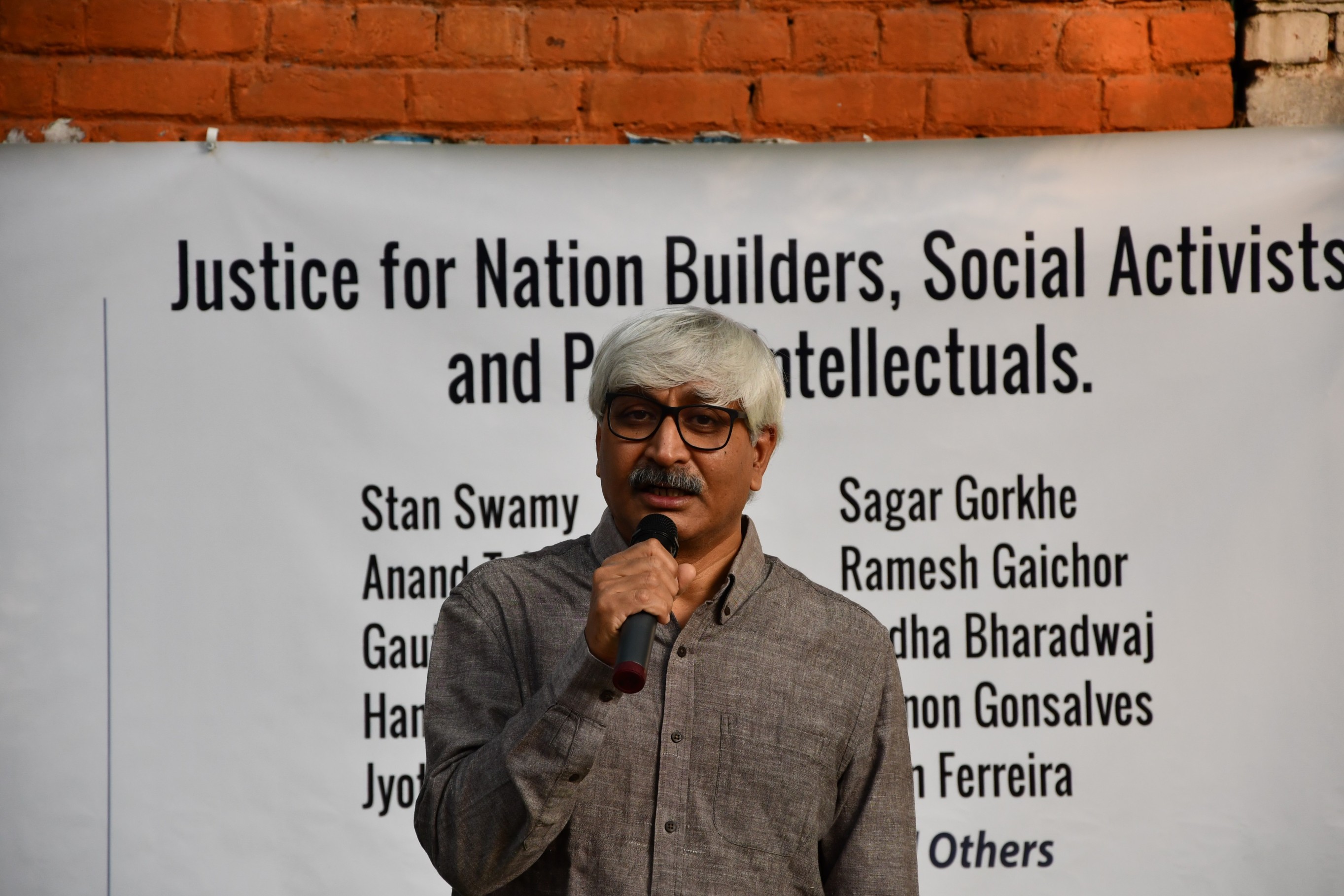 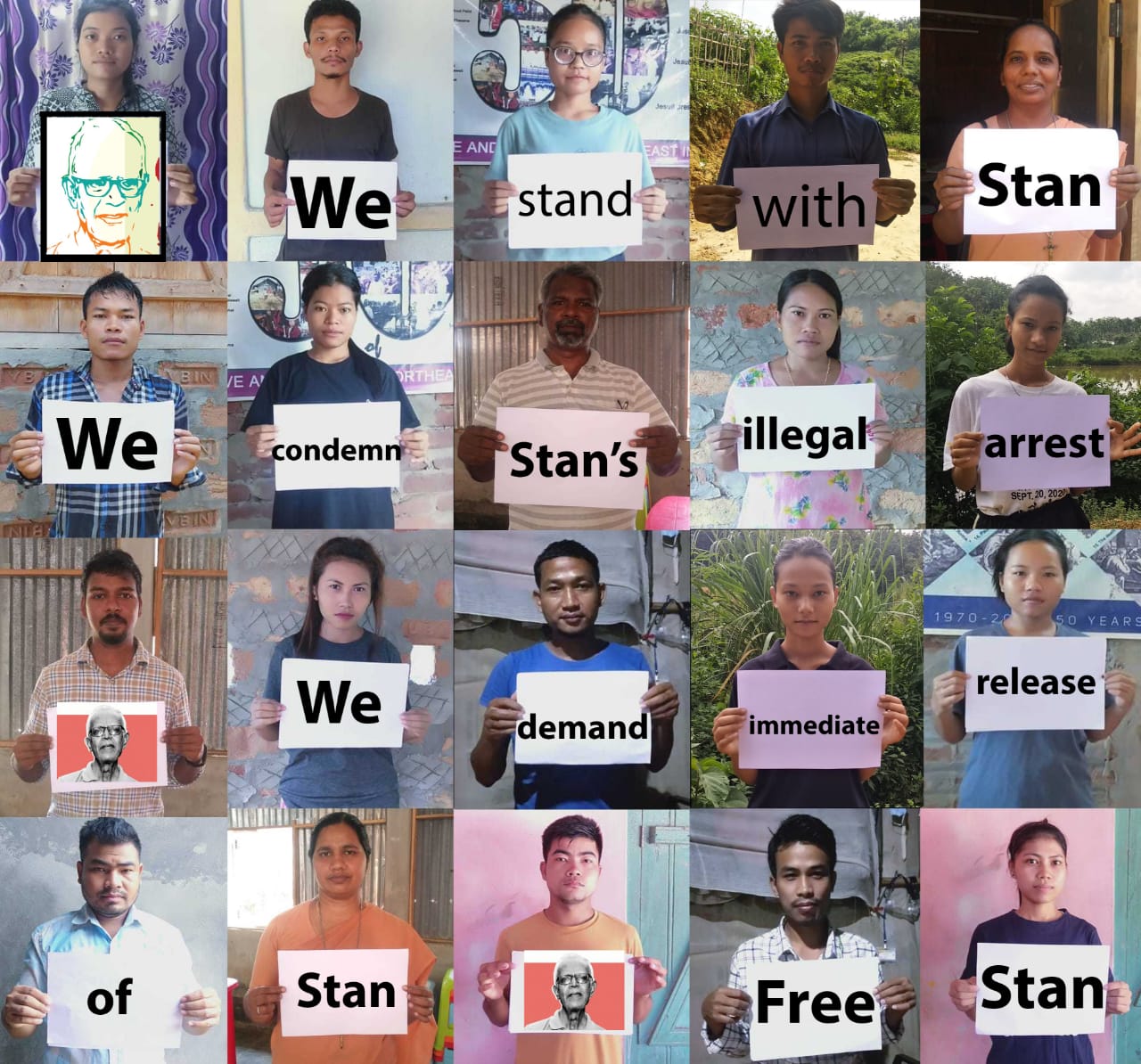 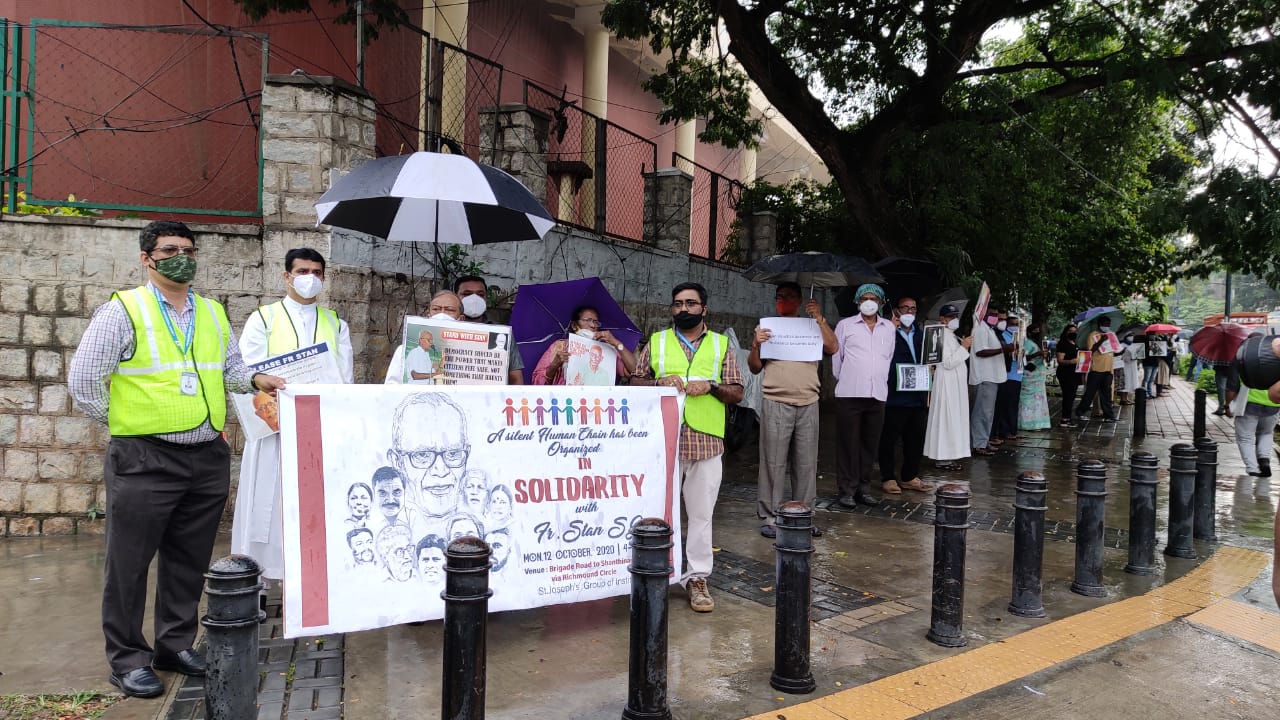 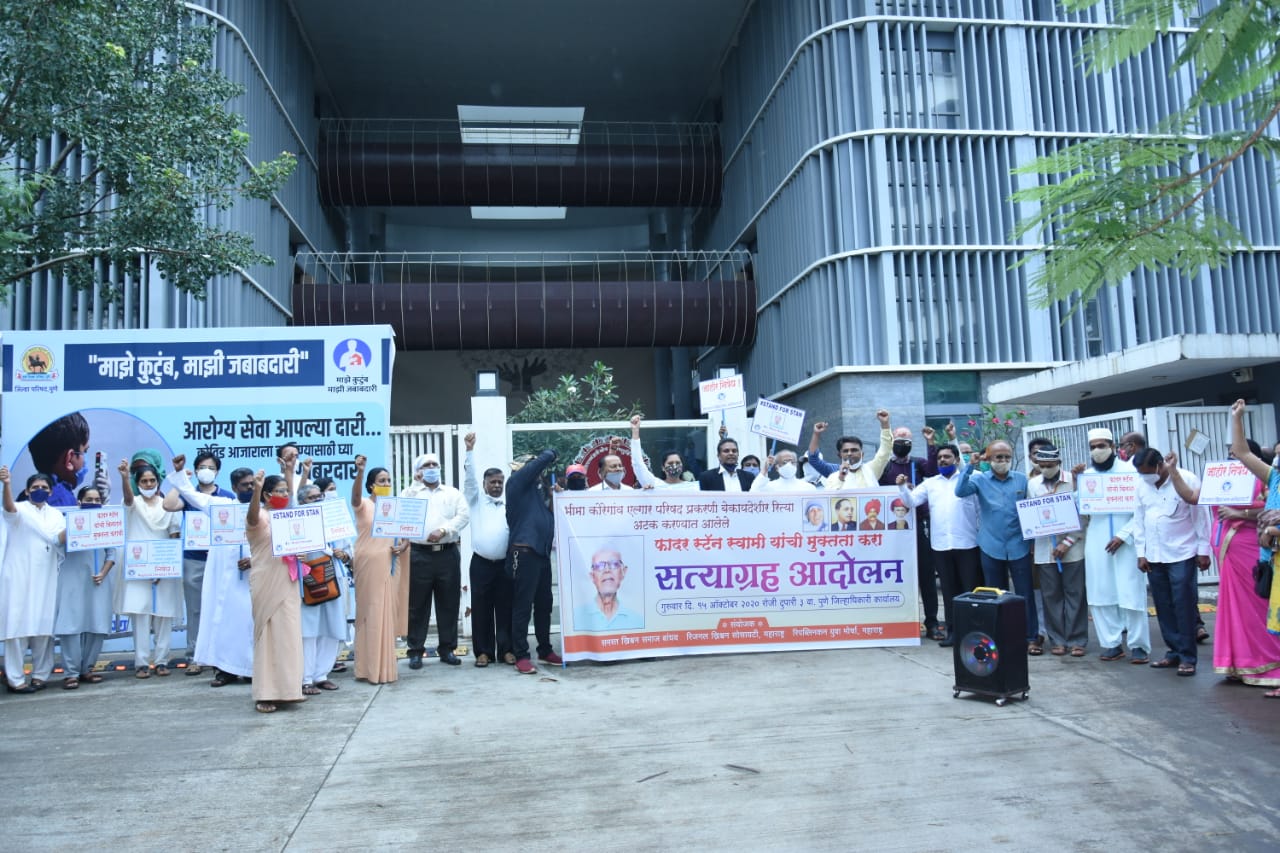 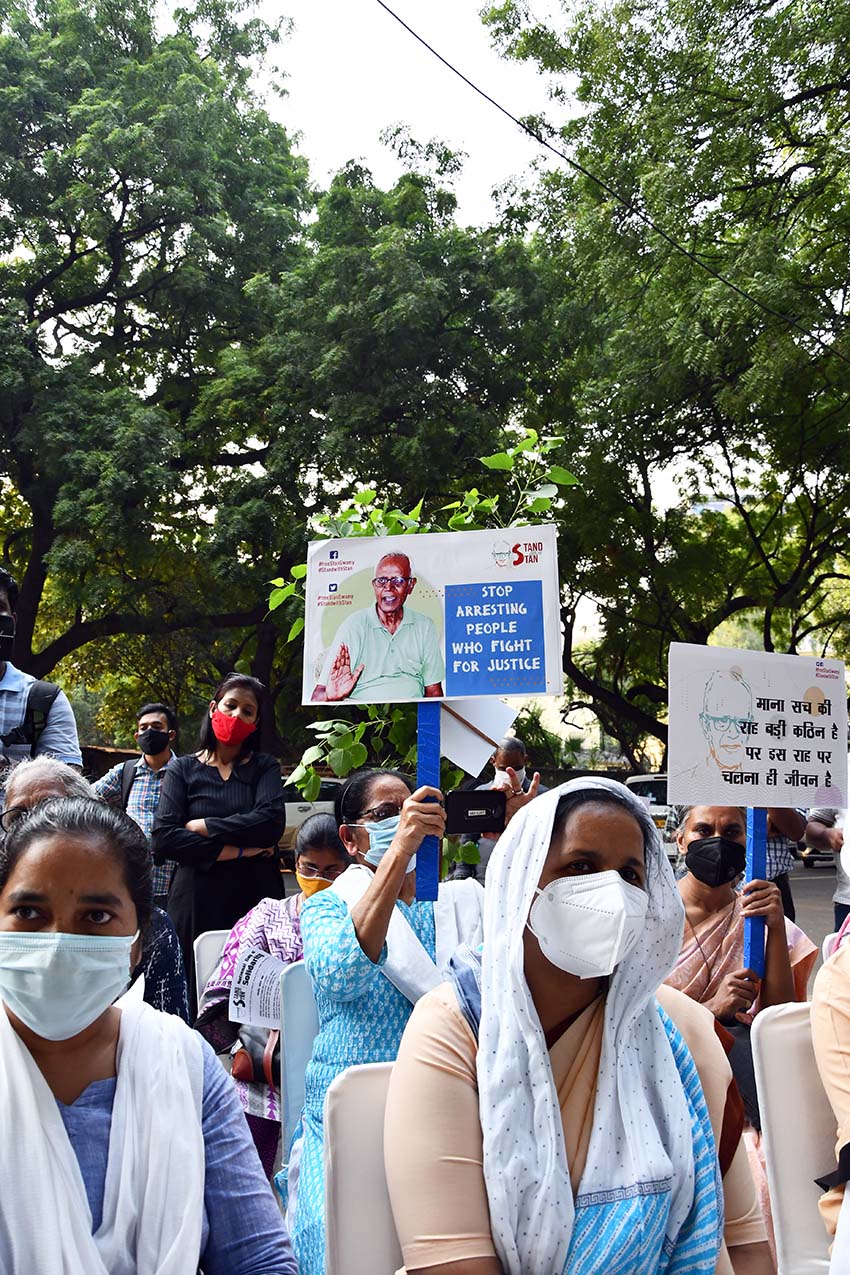 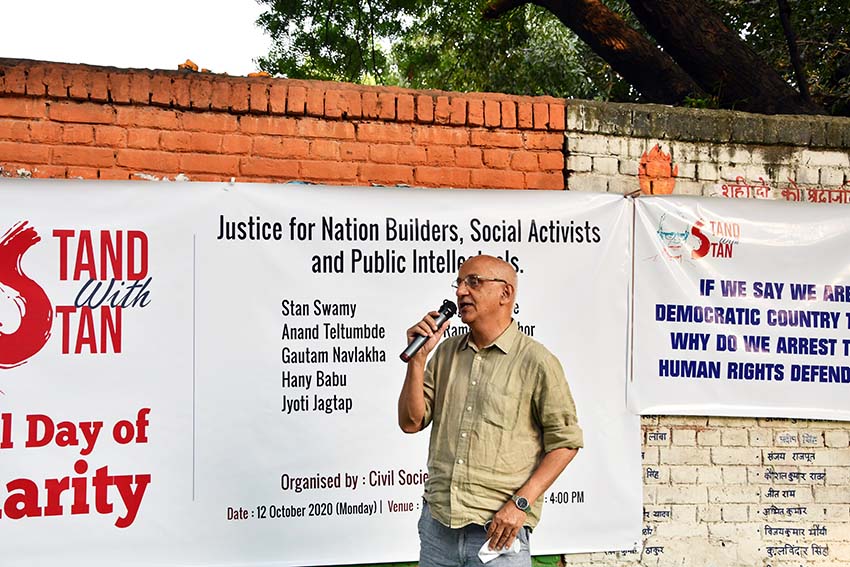 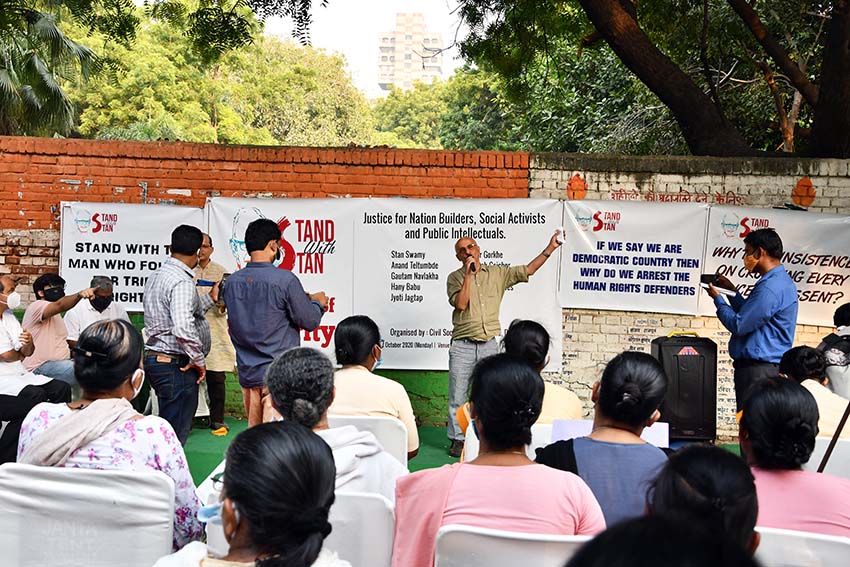 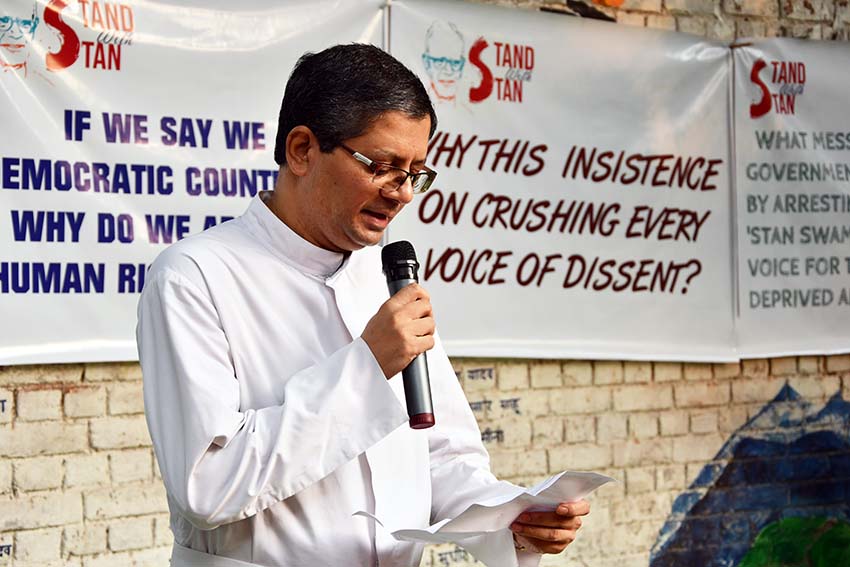 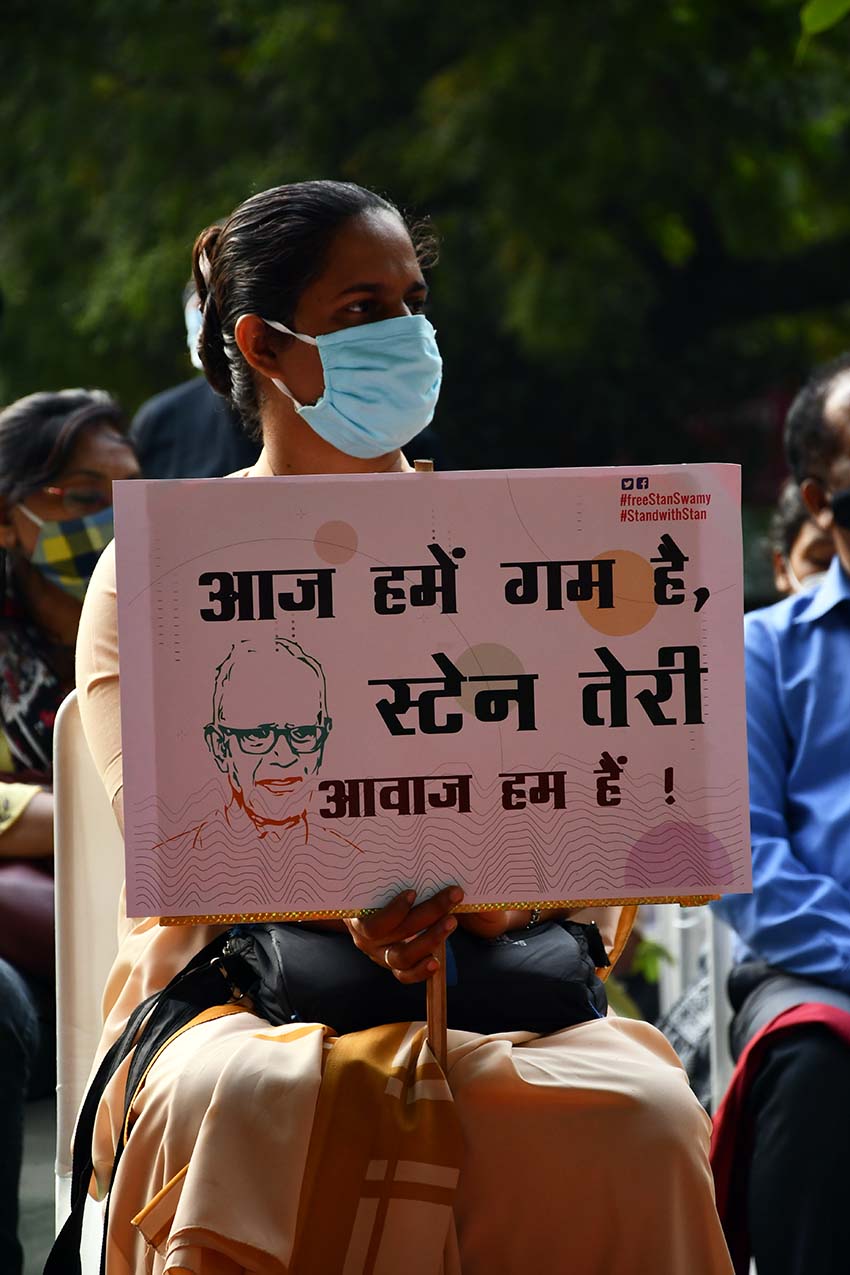 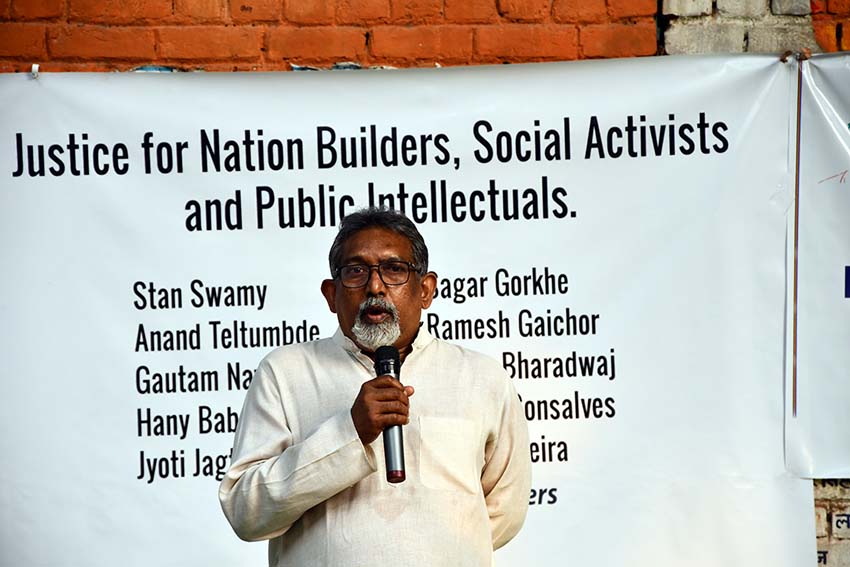 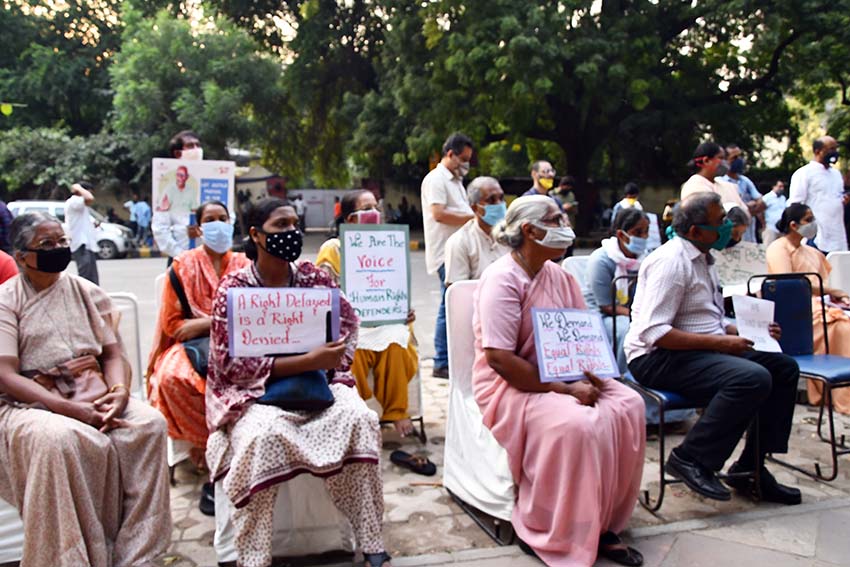 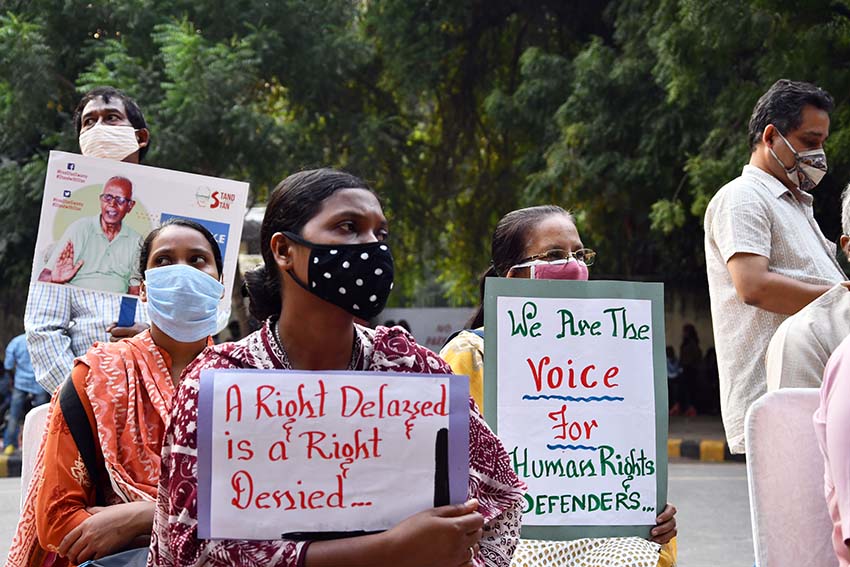 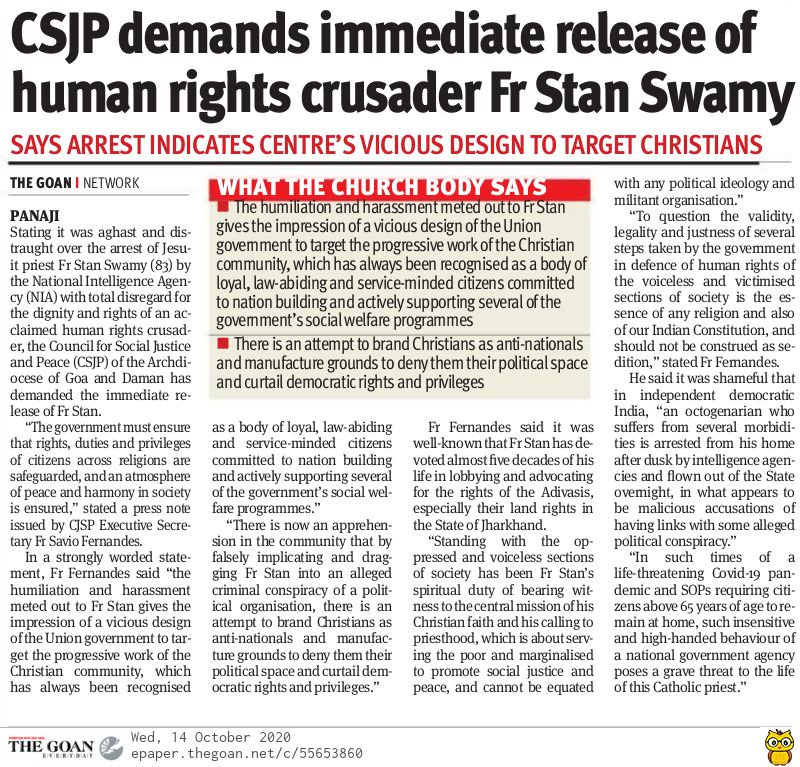 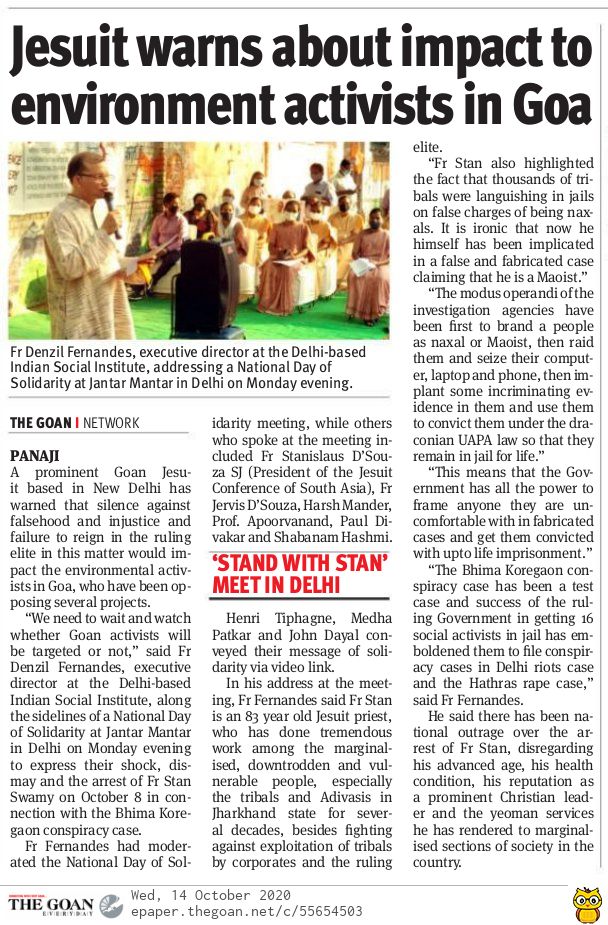 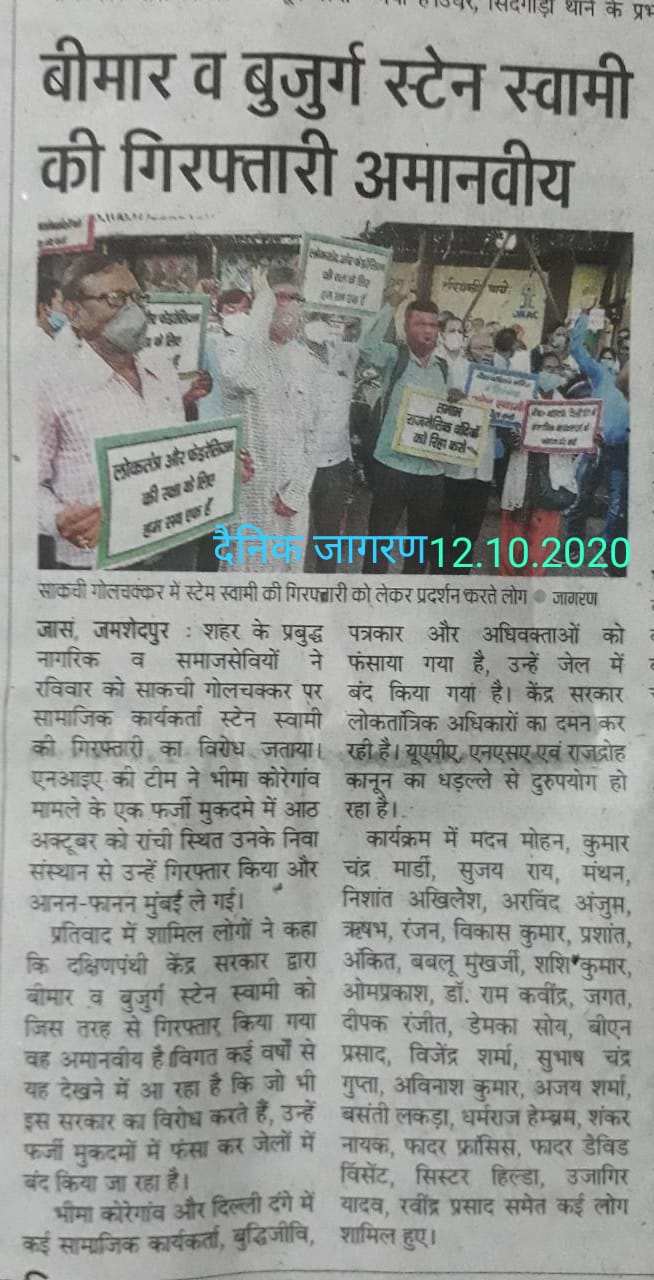 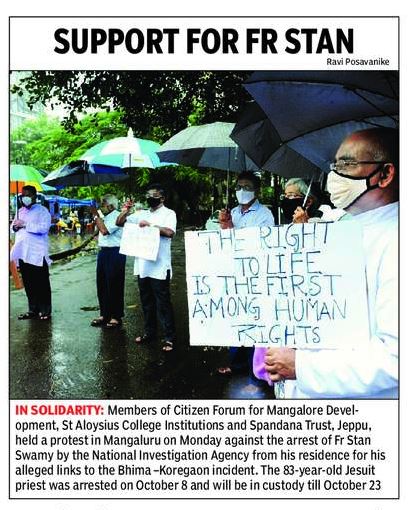 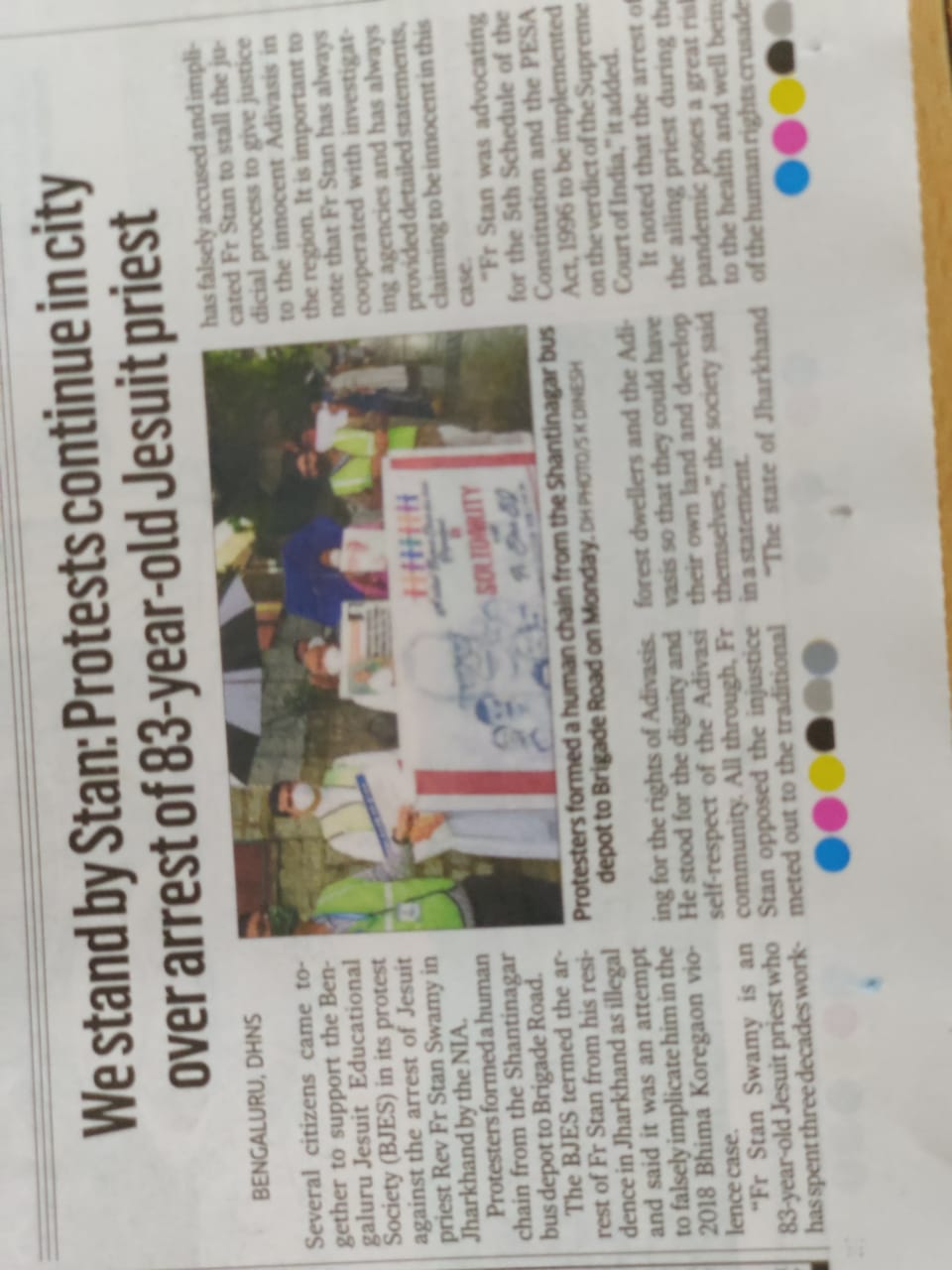 Who is Stan Swamy?

Fr.Stan Swamy has been arrested by the National Investigation Agency (NIA) in connection with the probe into the 2018 violence in Maharashtra's Koregaon-Bhima village. He is the seventh person arrested in the Elgar Parishad- Bhima Koregaon case on Thursday, 8 th October 2020.

Father Stan Swamy is a Jesuit priest and a tribal rights activist based in Jharkhand. He has worked in the state for over five decades on various issues of the adivasi communities on land, forest and labour rights. This includes questioning the non-implementation of the Fifth Schedule of the Constitution, which stipulated setting up of a Tribes Advisory Council with members solely of the adivasi community for their protection, well-being and development in the state.

In a statement given two days before the NIA took him into custody, Swamy said that he had challenged the “indiscriminate” arrest of thousands of young adivasis and moolvasis with investigating agencies labeling them as “Naxals”.

Swamy had filed a public interest petition in the High Court against the state, asking for all such undertrial prisoners to be released on a personal bond, and the conduct of a speedy trial. He had also sought the appointment of a judicial commission to investigate the reasons for delays in the trial process.

Swamy’s work also involves opposition to the setting up of “land banks”, which he argues would free up land belonging to the community to set up small and big industries. Swamy’s statement says that his work involved expressing dissent with several policies of the government, and laws enacted in violation of the Constitution.

Swamy was questioned multiple times by the NIA including in the last two months at the Jesuit residence in Bagaicha. Searches were also conducted at his residence with the NIA claiming his links to Maoist forces. He has said that the NIA placed several extracts before him claiming they were taken from his computer implicating his connection to Maoists. “I told them all these were fabrications stealthily put into my computer and I disowned them,”Stan Swamy, who has several health issues, is the oldest person to be in custody in the Koregaon-Bhima case. Originally from Kerala, Stan Swamy has been working for tribals in Jharkhand for over five decades.

Civil Society Organisations and Jesuit Partners in India and across the world express solidarity with Fr.Stan Swamy and for the cause he has dedicated his life. We request all the supporters of Fr.Stan Swamy, well-wishers of JCSA and the public to extend your support to release Fr.Stan Swamy.

Arrest and imprisonment of the 83-year-old Jesuit priest, Fr. Stan Swamy SJ by the National Investigation Authority, on 8 Oct 2020 has shaken the conscience of academicians, social activists, human rights defender, teachers, students, NGOs, CSOs, political parties, dalit, adivasi and minority leaders and every civilized citizen of India and all over the world. Solidarity support for Stand with Stan, Save Democracy, Demand Justice and Free Stan Swamy and other Human Rights Defenders is gaining momentum.

“If these are criminal and anti-national actions, I am ready to pay the price”, Stan Swamy.

Would you like to join the campaign in defending personal liberty of the human rights defenders as well as save the Constitution? Do you want to join us and demand that Stan must be immediately released from the prison? Sign this petition.

Let us all join hands together to show our support to Father Stan Swamy.Fill the form below to show your support.